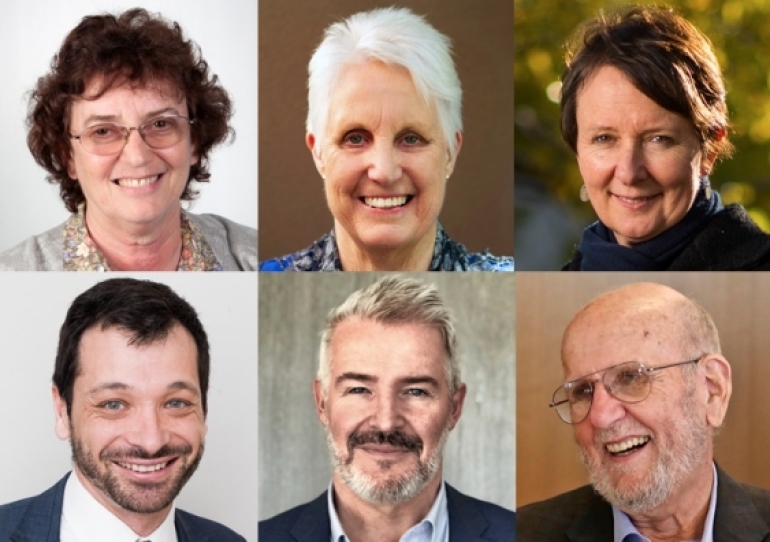 Six finalists, with decades of experience in challenging the boundaries of knowledge about mental health care, were selected for the 2018 Australian Mental Health Prize. The significant work of the individuals addresses all facets of the mental health sector including research, investment, innovation, prevention, partnerships, and improving awareness and understanding.

The prize recognises Australians who have made outstanding contributions to the promotion of mental health or the prevention and treatment of mental illness.

“The 2018 finalists are catalysts for significant sector change and have made a major impact on the mental health landscape at all levels, in our communities at a grassroots level, as well as nationally and internationally through shaping policy and improving understanding,” said UNSW Sydney Scientia Professor Philip Mitchell.

“It has been inspiring to see how the Prize has elevated the recognition of those working in the field of mental health,” he said. “So many people dedicate their lives to ensuring better outcomes and care for those with mental illness. Their work deserves to be applauded.”

“One in three Australians will experience a mental health condition at some point in their lifetime. With so many people affected it is easy to feel overwhelmed by the challenge before us as a nation. That is why it is important that we highlight the incredible achievements and persistence of the dedicated individuals working in this field. Their work is making an incredible impact and saving lives every day. They deserve to be commended.”

Leading international researcher, clinician and advocate for youth mental health and former Australian of the Year, Professor Patrick McGorry, announced the winner at an award ceremony at UNSW on October 19, 2018.

In a 60-year career in mental health, Emeritus Professor Gavin Andrews has been an innovator, clinician, teacher and researcher. He is among the world’s most highly cited scientists in this field. He is responsible for preparing the first ever set of clinical practice guidelines in psychiatry; the first National Survey of Mental Disorders; and a range of online courses for people with common mental disorders. Gavin thinks that the field is poised to offer cures to half the people who develop a mental disorder. Given good diagnosis and treatment, he says, the person who is not improving in 30 days should “ask their doctor why”.

Matthew is a passionate mental health and wellbeing advocate. He develops and delivers illustrated programs, videos and talks on mental health, resilience and wellbeing. Matthew has written, illustrated and photographed eight books, six of which have been local and international best sellers. His first book, I Had a Black Dog, details his journey with depression and has been published in over 15 countries. The video version created for the World Health Organisation (WHO) has had more than 30 million views on their combined media platforms, the most viewed video in the history of WHO. Matthew has done creative consultancy for the Black Dog Institute, The Golden Door Elysia, Geelong Grammar, the government of Norway, CommBank, Sydney Trains and many other major corporates. His work has been endorsed by Stephen Fry, Edward de Bono, WHO and Google.

Janne has worked as a mental health consumer advocate since 1997. She is the Founder and Executive Officer of the Private Mental Health Consumer Carer Network (Australia), the recognised peak Australian advocacy organisation for the private sector. She has appeared before ten parliamentary inquiries, has been a member of many expert reference groups, committees and working groups. She is a member of the SA Health Practitioners Tribunal, a Board member of Mental Health Australia and was a surveyor for 15 years. Janne gained funding for the development of the NHMRC Clinical Practice Guidelines for BPD and the BPD National Training Strategy. She has been instrumental in the establishment of the SA BPD Centre of Excellence, is a member of the Executive Steering Committee and former Patron of the Australian BPD Foundation. In 2008 she was awarded the Medal of the Order of Australia in recognition of her advocacy work.

Vivienne has worked in mental health services in Australia and England for more than 45 years in many capacities: crisis intervention; suicide prevention and intervention; group analysis; management of quality improvement programs; creative arts therapy; therapeutic communities; and activity-based programs. She is a co-author of the National Standards for Mental Health Services (1996) and an advisor to the National Mental Health Workforce Standards. Since 1996 she has held the position as Conference Director of the largest, most inclusive mental health conference in Australia, TheMHS Conference, run through TheMHS Learning Network Inc. TheMHS attracts more than 1000 clinicians, managers, team leaders, consumers, families, educators, policy-makers and researchers annually and organises national mental health service achievement awards. Currently Vivienne is involved in developing a Museum of the Mind inside a Mental Health and Arts Precinct in inner Sydney.

Jono Nicholas has a 21-year history and commitment to improving youth mental health. With almost 10 years’ service as the CEO of ReachOut – Australia’s leading digital mental health service for young people and their parents – Jono has advocated for a change in thinking and that technology and smartphones can and will transform the way mental health and wellbeing services are delivered.  In June this year Jono announced his departure from ReachOut and is currently the Managing Director of the Wellbeing Outfit, an advisory firm that improves organisational performance by improving the wellbeing and resilience of their staff. Jono has background in psychology and public health.

Professor Jane Pirkis is the Director of the Centre for Mental Health at the University of Melbourne. She has qualifications in psychology and epidemiology, and her work focuses on how to improve the mental health of populations. She is particularly well known for her work in suicide prevention and has conducted world-first research looking at how the media in all its forms might be used as a force for good to save lives. Her work has informed Australian and international guidelines for journalists on safer ways to present suicide-related stories, and she recently partnered with Movember and Heiress Films to make and evaluate Man Up, an ABC documentary and social media campaign on suicide and masculinity that was viewed by millions. Jane is the Vice-President of the International Association for Suicide Prevention and the Editor-in-Chief of the premier suicide prevention journal Crisis. 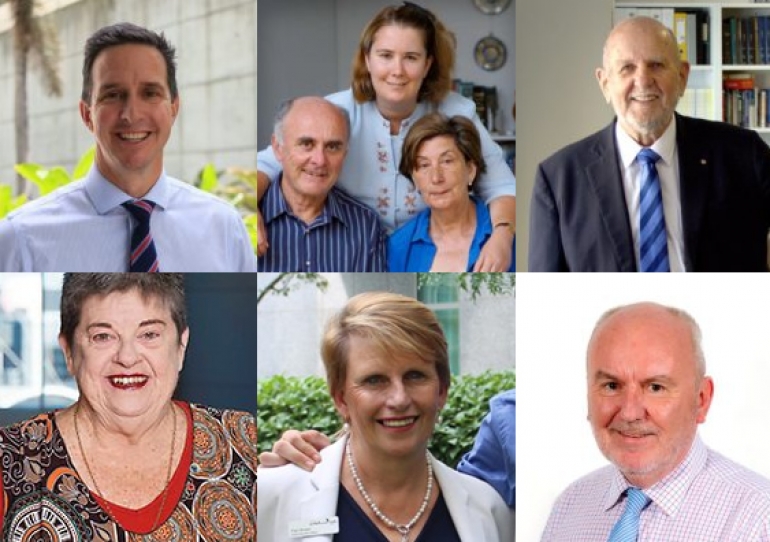 Janet Meagher (joint 2018 recipient), Engadine, NSW
Living with schizophrenia since 1969 and uses her experience to champion the rights of others.

Patrick Hardwick, Tuart Hill, WA
Patrick is the driving force behind The Practical Guide for Working with Carers of People with a Mental Illness

Annette established The Winter Solstice in her hometown of Albury, NSW, an event that gives recognition to the many people dealing with suicide and their complicated grief. It encourages conversations about shared lived experiences, providing greater opportunities for healing. Annette lost her daughter Mary to suicide when she was 15.
Betty Kitchener (Melbourne, VIC)

Betty founded the Mental Health First Aid (MHFA) program, the first of its kind in the world. Designed to give members of the public hands-on training in how to assist someone during a mental health crisis or episode, the MHFA program has a strong evidence base and has now been rolled out to over 20 countries with 1.7 million people trained globally.

Ian is a major force in Australian mental health, the founding CEO of beyondblue, a key advisor to Federal Governments, a current member of the National Mental Health Commission and a strong public voice for improved mental health services. An internationally-renowned researcher in depression, early intervention and youth mental health, he was instrumental in the creation of headspace and the Young & Well CRC delivering unique services and new on-line technologies to young people.

James is a former soldier in the Australian Defence Force, having served in East Timor, Afghanistan and Iraq from 2002-2011. After being discharged from the Army, James developed Post Traumatic Stress Disorder (PTSD) and depression, and began to self- medicate with alcohol. He has since written a book, ‘The Returned Soldier’, based on the diaries he kept, detailing his symptoms, treatment, and ongoing battle with mental illness. He is a staunch advocate for mental health, and has crossed the Bass Strait in a ‘tinnie’ to raise funds for the Black Dog Institute. James will soon be a qualified yachtsman skipper and is currently planning to teach ex-soldiers suffering from a mental illness to sail in a controlled environment on his boat. He hopes to give them a chance to feel what he feels on the water– 110% mentally and physically well.

Joe Williams is a Wiradjuri man, former NRL player and professional boxer who runs his own suicide prevention organisation and charity ‘The Enemy Within’ (TEW). Joe travels around Australia speaking at schools, sporting clubs, workplaces, organisations and remote communities, where he delivers workshops about suicide prevention and how to maintain positive mental health and wellness. He is an advocate and leader in suicide education, prevention and support for all people, but has particular care for First Nations Australians, who are six times more likely than the non-Indigenous population to suicide. Joe fought his own battles with mental illness and drug and alcohol addiction, and survived a suicide attempt in 2012. From that time, he turned his life around and became committed to helping his all people understand and work towards optimal mental health and wellness.

John is a mental health and suicide prevention advocate, policy analyst and researcher committed to sector reform and reducing the rate of suicide in Australia. He has worked in alcohol and drug and mental health for nearly 35 years. John lost a nephew to suicide in 2014 and uses his knowledge as a former senior public servant and his personal experiences to educate the community about the issues associated with mental illness and suicide. John is a former CEO of the Australian Sports Drug Agency, former CEO of Mental Health Council of Australia and former chair of the National Advisory Council on Mental Health to the Federal Government.